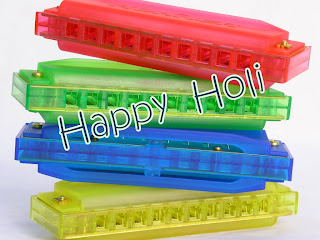 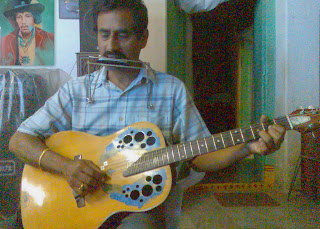 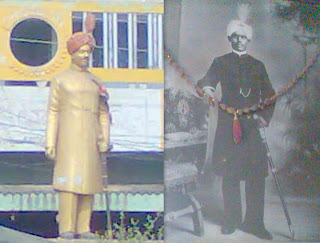 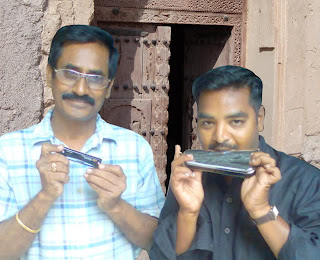 I'd like to express my deepest thanks to Rajah of Pithapuram (ROP) Shri RVMR Ratna Rao for his love and affection towards me during my recent visit to their palace in Pithapuram. I thought I would take this opportunity to tell you a little bit about him, and share a few videos and photos I took. Just wanted to share with you the exciting (for me, anyway!) experience.

As some of you know, Pithapuram is a historical place in AP which was ruled by the grand fathers of existing Rajah Shri Ratnarao for centuries. Few colleges like , and Rangaraaya medical college, were donated by them.

I was delighted when I was invited by him to their palace. I was very much curious to visit the palace not only to see the antiques, riffles but harmonicas as well. Yes… to see the grand collection of harmonicas.

As soon as I entered the palace, ROP had offered water and a soap to wash my hands. I told, “Sir I just finished my breakfast!” ROP answered with smile: Please wash your hands to have a musical feast and there was a beautifully carved leather pouch in front of me. I thought it could be a pistol, because collecting riffles and guns is one of his hobbies. ROP asked me to open the pouch and to my surprise it was a harmonica (SUZUKI SCT-128). No doubt it’s quite expensive to own. It’s a combination of chromatic and tremolo harmonicas built in a single body. ROP asked me to inaugurate it by playing because it arrived just a few days ago. I felt like a harmonica virtuoso at that moment :-P and thanks to ROP for honoring me in such a way.

His Harmonica collection comprises more than 100 premium class harmonicas like Hohner Super Chromonicas 270 in all scales, 30years old Larry Addler, 280, Super 64x, Marine band deluxe set, Special 20s set, Meister class, Cross harp MS, SUZUKI-total sets of Firebreath, Bluesharp, Folkmaster, Overdrive300, Manji, Harpmaster, Pipe humming harmonica, SCX chromatic in all scales, SCX-64, Gregory Marett, SCT-124 harmonicas etc. Apart from harmonicas, he is also a proud owner of Roland Fantom-G8 Music Workstation(keyboard) worth 2.25 lacs and a Gold plated Gibson Les Paul custom guitar which he purchased and received directly from the hands of (Late) Mr Les Paul who is the founder of Gibson guitar company during his visit to in early 90s. After seeing all harmonicas I could not resist myself asking a question: “Sir, what is your favorite harmonica?” Immediately, he went to his bedroom and brought a 56 years old Hohner Marine Band 10 hole diatonic harmonica which was gifted to him (on his persuasion) by his uncle when he was just 6years old in (Chennai). That’s how harmonica entered in his life at avery tender age.

Then, began our musical session. ROP is a great fan of Hendrix , Mark Knopler and Eagles a great classical guitarist, lyricist and a composer. We feel proud of him because he is a harmonica lover too.

I hope ROP don't mind me posting this video here for others to enjoy. Of course, if I receive any objections, I'll take it straight down.

It was 3 0 clock then. Both of us were hungry and ROP offered me a great lunch with all my favorite non veg. dishes. The dining table was bigger than my master bedroom :-P

ROP and I enjoyed my visit to their Palace and would like to go there again but along with all HaLoH members!

Give me some sun shine- 3 idiots

I love playing Harmonica. I had started learning it when i was in college. My friends would definitely remember me for this (not for studies he he he). After playing for a couple of years I almost left playing because of my job pressure. But one fine morning I saw Harmonica Lovers of blog. I joined the group immediately. And it was a rebirth for my Harmonica skills. I am learning a lot from them and sharing my knowledge too. I normally play with HOHNER SUPER 64X.

This time i have selected a song from the film 3 Idiots. Give Me Some Sun Shine.Hope you all would like it

I am trying out a couple of songs, hope you would enjoy!

You can also catch me on my youtube channel http://www.youtube.com/user/Avineshutube

Labels: avinesh, Give me some sun shine- 3 idiots, haloh, harmonica lovers of hyderabad

Sometime back we had posted that Siasat one of the oldest Urdu dailies published from Hyderabad had recorded interviews with HaLoH. They have uploaded excerpts to their site under videos. The address is http://www.siasat.com/video/entertainment/mouth-organ-passion

We would like to take this opportunity to thank "Siasat" and their correspondent Majid through this blog.
Posted by Kailash at Friday, February 19, 2010 2 comments: 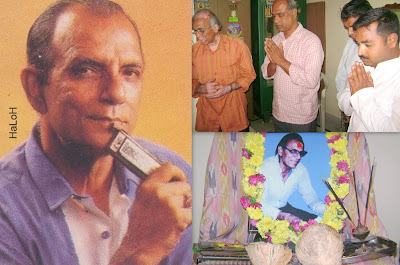 Harmonica Lovers of Hyderabad pays tribute to the Indian harmonica legend (Late) Shri Milon Gupta who breathed his last on Feb 18th in the year 1995.

may his soul rest in peace. 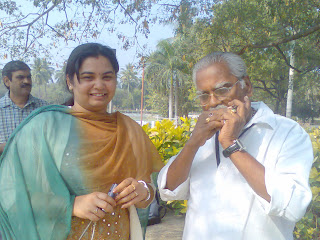 Shri Amaram Rajkumar, executive member of Harmonica Lovers of Hyderabad (Regd.), a man of simplicity and one of the senior harmonica players of was born in a Royal family of Secunderabad. He’s a retired employee of Greater Hyderabad Municipal Corporation, but still serving the AP state Govt in the same Dept where he retired. Mr Rajkumar was inspired to pick harmonica by his friend Late Shri. Cyrus Mehta, a sailor who always used to carry a harmonica in his pocket in the early 60’s. Shri Rajkumar has been playing the harmonica since his college days has performed many a times in various prestigious auditoriums including Ravindra Bharati. Several news papers have written lot about his talent. Apart from harmonica playing Mr Rajkumar also has a grand collection of rare LPs, EPs and cassettes of his favorite artistes like Shri Milon Gupta, Shri Madan Kumar and also some western artists.

Mr Rajkumar, another front runner of HaLoH, never waits for any invitation to play the harmonica. When he plays the harmonica, at least 10% of can feel the vibrations of his harmonica and he can manage a huge audience without a mike. This is one of the reasons why we usually start and end our harmonica sessions with him.

This Sunday, we were all awaiting Mr Rajkumar and he appeared in a cool pink T-shirt with charming looks. No wonder we realized that it was Valentine’s Day and he played all LOVE songs on harmonica. The session started with the song ‘Oh Maria’ (from the film ‘Sagar’) by me followed by other players. Finally, it was Shri Rajkumar’s turn to say ‘SAYONARA’ on his favorite Hohner Chrometta14 (from the film ‘Love in Tokyo’) for the day. Please watch this video. 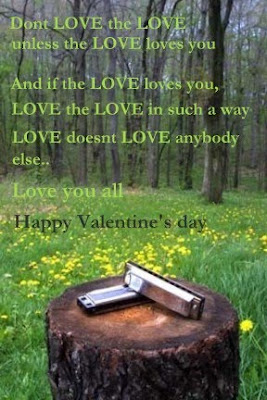 Love from the land of melody 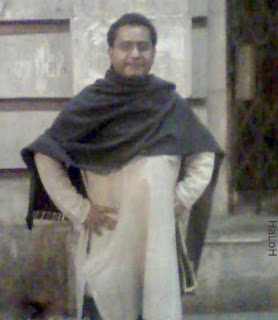 I believe, every human being on this earth has an attachment to a place which could be his birth place, the place where he grew up or studied, the place where he fell in love with someone or may be a place related to his religious beliefs. Shri B. Vinayak, the backbone of HaLoH (Harmonica Lovers of Hyderabad) has a similar attachment to the city of joy-Kolkata. I believe the reason behind this attachment can be best described by Shri B. Vinayak himself. I request him to describe his bonding with Kolkata and his experiences at this city in his recent trip. Vinayak ji, are you reading this?

Please listen to this number played by Mr Sumanta Basu

After 6 days long trip to Kolkata, Shri Vinayak returned back to and met me this Sunday at Indira park. Affectionately he gave me a CD “Those were the days ” which was sent from Mr Sumanta Basu with his autograph on it. The moment I saw the autograph, I kissed the CD because I felt it like an honour for me from my favorite artist. Unlike other Sundays,I left Indira park a little early as I was very much desperate to listen to Mr Sumanta’s latest western numbers. After listening to the album, the hangover still continues in me. Given below are the songs which he played in this album.

11.Those were the days

The CD was recorded by Mr Sumanta Basu himself at his home. Quality of recording is at par with many international albums. I strongly believe his skills will be recognized by global harmonica lovers very shortly

Write up on the CD by Mr.Sumanta Basu

None of the 14 numbers, chosen for this album are from my own country. In fact they do not belong to any particular country. These times, different in character, created at different times in different societies and I have been recorded by various artists long before I was even born. Hence the onus of judging the authenticity of these numbers played by me rests solely onto the listeners.

The responsibility that I have taken on myself besides playing the tunes on the harmonica are that of recording, mixing, CD mastering along with creating this inlay.

I am deeply indebted to the medium called Internet for the music arrangements. I however, regret being unaware of the names of my accompanying musicians.

Well, I guess, this is globalization..

To listen to more Indian songs played by him, visit his eSnips profile at

Sumanta, we love you... Looking forward to listen to your future works.