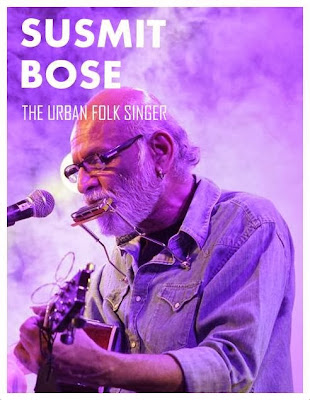 Most of us have seen some artists singing along with the Guitar and also playing the Harmonica affixed on a rack around one’s neck.  Today, we are featuring an accomplished artist whom we would love to address as Bob Dylan of India. He is none other than Mr Susmit Bose.

Susmit Bose plays the harmonica as a part of the folk style of Woodie Guthrie and Bob Dylan. As a motivation, it was obviously Bob Dylan which prompted him to pick up the harmonica. His favourite artists also include Pete Seeger and the Bauls of Bengal. He also likes the way Neil Young uses the harmonica. He, who considers himself as a friend to all, has discovered to play the harmonica and uses this cute little musical instrument in most of his songs. He usually plays the Hohner Blues Harp.  He has been playing harmonica for the last 40 years.

In 1981 Susmit Bose  in Newark, New Jersey with Pete Seeger before a concert. 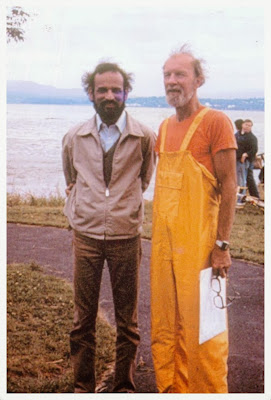 Published below is his self introduction.

The decade of the sixties and seventies really mattered! Or so I felt as I, an Indian, could subliminally sense the waves of disillusionment of the West towards post-industrial materialism, even as those waves were wetting our feet on the shores of the subcontinent. The human shame of the Vietnam war, the technological imperialism of the "moonwalk," the underground politics of Cold War, the nuclearisation of life and the quest for a spiritual meaning to one's life characterized the era.

Many of us in late school and college at that time knew in our painful bones, that it was only a matter of time before India would need its own Pete Seeger and Bob Dylan to sing about the angst of urbanization and fragmentation in the country brought about by "development."

Thus I, as part the English educated, book-reading, exposed, Indian brigade, was mesmerized by the poetry and song of Pete Seeger and Bob Dylan whose lyrics and balladeer style found echoes several thousand miles away in a land mass that was yawning itself out of an old civilization into nationhood even as it was taking its age old music into the heart of rockland to break the mutual impasse forever. The energies were awesome and so were the pitfalls. I began to feel the need to sing like never before and I wanted to sing for India as she was slowly and steadily girding her loins to join the rat race of modernity and development. I decided to lend my skills to the global justice movement.

And so, travels and many international gigs later, I became a singer in modern India inspired by my icons of social change in the West. I began to sing about peace, the ravages of strife and war, and the demented chasing after the good life. I have been walking the musical side-street now for thirty years, sometimes making a living from my poetry and song. Thirty years later, a new pain pierces my song everyday as I watch a neo-liberal globalised contemporary India sprout gory horns of fascism and communalism, displace its rural poor with massive development projects, rape the land and its women, triviaalize the commonsense of traditional knowledge, nurture corruption into large-scale plantations, delay justice for thae common man, capsize her own identity and self-respect, and systematically get rid of the good and sensible in favour of "yapping cash." Wither the safety of a sane society? I must sing now for India as I sang in my youth to just let my song out there, out of the cage.

The one overriding conviction that has settled into my guitar-playing fingers is that culture is the best way of sending a message about even the most complex issues. In my over thirty years of using songs as a medium for advocacy, I am convinced about the efficacy of music as an influence of change. The pulse of the audience transmits itself again and again to me – I have felt "men of conscience" emerging from a rockstone of apathy, seen women cry, heard children clap and sing the chorus and heard the sighs of men. In the middle of all this, I offer thanks that in the last thirty years I haven't sold my soul to music without meaning. I have sung what I believed in and believed in what I've sung. And so I've come to be known as an "urban folk" singer, a term I coined in order to define my style of singing and songwriting as opposed to the traditional folk music traditions, which are rural based and had its own themes which were very different from a rapidly urbanizing India. On the other hand, urban India, with all its contradictions was permeating into the slumbering rural life of India. Finally, as a true denizen of urban India with English being my main tongue, I chose to write and sing in English also with the belief that it was the English speaking sector that made all the policy changes in the country and had the power to install, instill and change, unfortunate though it is. Therefore, I have been commenting on urban life and all the chameleon changes in a fast developing civil society through my songs since 1971 in India.

While I was groping for a definition of my "urban folk" genre, I had extensive discussions with sociologists, historians and musicians whose academic analysis felt a little too intellectual for me. However, when a stockbroker friend, simply defined it as "public issue" I had my definition.

While I sing about the deep morass of the moral and civic decay of modern India and the increasing decline of the moral order, I also try to draw upon her perennial wisdom. I have been fascinated by the living traditions of the Bauls of Bengal, a group of wandering minstrels. I sing their songs and have worked extensively with them. 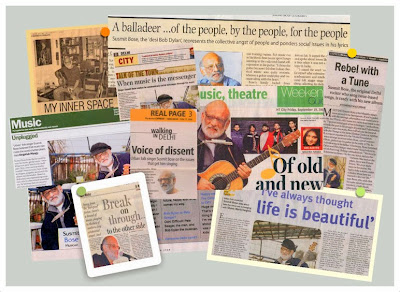 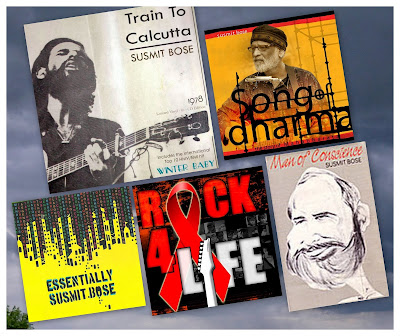 We breathe harmonica!
Posted by Ramana at Monday, December 02, 2013 No comments: