Harmonica Lover of Hyderabad Ramana was longing to meet Shri Gautam Chodhury aka Gautam da who inspired him to play the harmonica seriously for quite some time.  He could meet Gautam da this week at Bengaluru. 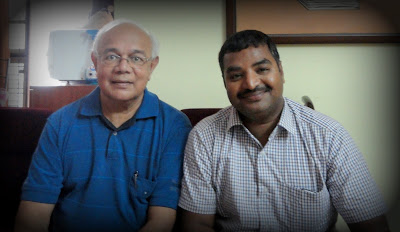 Love with Harmonica
Most of us know who Gautam da is. He is an IT consultant turned serious harmonica lover who has settled in Netherlands after traveling to a couple of European countries. It all started during his boyhood days when he came across a strange musical instrument with beautiful sound through a school kid who refused to part with his instrument. Later he purchased one tremolo harmonica and started playing some songs by ear. He fell in love with this instrument because it could be carried anywhere, anytime, made other people happy with its beautiful sound and helped him make more friends.

After picking up the harmonica as a boy in Patna he trained himself over the years. He came into his own in Kolkata, playing with many popular musicians at Trincas and Blue Fox, and had a band. He started playing music for films after meeting music director Salil Chowdhury, whom he regards as his mentor. He plays Indian Bollywood music, Bengali songs as well as Western music on harmonicas.  Given below is the musical journey of Gautam da in his words.

Sojourn at Kolkata
“I have always been an admirer of Salil Chowdhury's music. I remember back in my university days in India I would organize groups and we would all sing Salil's compositions such as 'O aalor patha jaatri'  in harmony but much before that, I mean during my early teens I was absolutely amazed with the compositions such as 'Jaa re ja re ude  jaare paakhi' or ' Naa jeo naa' by Lata or 'Moner janaala dhore' by Hemanta Mukherjee. That was when I started playing harmonica and guitar. Salil's songs were in one hand a great challenge to play but they were also our great inspiration and musically very educational. In those heady days nearly everybody, at least most of my musical friends talked and argued about the complex chord progressions and the complicated harmony in Salil's songs. We would wait like hungry children for any new Salil song to arrive in the shops and would just devour it. I am not ashamed to admit that my musical taste, knowledge and thinking changed completely after I started getting into Salil's compositions. I knew then that I had to meet him. After I finished my master’s degree I moved to Calcutta and started working for an oil company. My main interest however was to get into the music circle as soon as possible. This is when I formed a harmonica group playing popular western music in clubs and restaurants. We got our gigs through an agency run by an Englishman called Toby who cheekily named us 'The Bloworms'. I guess I was the first in India to play the two-foot long Chord Harmonica in those days. Our gigs at the local Park Street restaurants and some clubs were organized by Toby. We played popular western and latin songs for the lunch and the evening crowd. I also joined Calcutta Youth Choir as one of the singers and played the rhythm guitar with the group. It was then that I also got opportunity to play guitar as a session musician in some Bengali films. The four years I spent in Calcutta was wonderful and I really learned a lot. I can't say that I was much impressed with my job. It was then that I decided to leave India and travel around a bit.”

European Experience: The Harmonica Movement
“After I left India I settled down initially in the UK and decided to join the IT industry. In those days IT wasn't so much in favour, but I quite enjoyed it anyway. Besides I got really involved with the harmonica movement, joined several UK and European harmonica clubs and frequently traveled around Europe playing and attending harmonica festivals. I met some freelance film makers working on behalf of BBC TV who were planning to make a film on harmonica and I traveled with them all over Europe. The result was an 8-hour documentary, beautifully shot but after editing ended up as a film called 'Playing the Thing' - a 30-minute docu-story on harmonica. It has been shown all over the world and had received critical reviews.”

“After a few years I left UK and worked in Germany, Spain and Belgium before returning to the UK, got married and left for Holland. This is where I live now. Before I moved to Holland I used to know quite a few harmonica players in Holland who helped us to make the film 'Playing the Thing'. One of the harmonica groups I knew asked me to join them as a Bass player. Since I could not play Bass at all I had to learn reading the Bass clef first and practice day and night to master the Bass. Learning the Bass was less of a challenge. The bigger challenge was getting the right sound, using the microphone correctly and playing with the group creating a professional sound. Well, eventually I was accepted and for a few years really enjoyed playing the Bass with a harmonica group called 'The Rapidos'.”

My Guru: Salil da
“Finally I met my idol and my 'guru' Salilda in the early eighties and since then I kept regular contacts by telephone, through letters and annual visits to India until the last days. I talked to him only a few days before he was taken ill and I was devastated when I heard that he has left us. I was very fortunate to meet him in the UK and in the US in the early '90s a couple of times.”

“I recorded some of Salil's songs in my harmonica and talked to him about it. He agreed to help me to record some songs in his studio in Calcutta. The result was the album 'A tuneful tribute to Salil Chowdhury' released by HMV. Since then I have released a few more albums. After Salilda's sudden and untimely death, I decided to record another CD of some of his most memorable Bengali songs. This album is called 'Durer Thikana' and was released by EMI.”

“In 1998 I decided to host a website in his honour and at the same time search, find and digitally record all his compositions. My dream is to try and preserve all his compositions electronically for the coming generation. I know this is not going to be easy but that is my goal. The website www.salilda.com was launched on his 3rd death anniversary - September 5, 1998.”

“Since then, I have been busy perfecting the content of the website, adding new information, hosting songs and answering hundreds of emails I receive. I had no idea that out there, there are so many Salil admirers. It's a wonderful feeling sharing Salil's songs.”

Words of Wisdom to all serious Harmonica Lovers
Gautam da believes that Harmonica is a very versatile and a complex instrument. It is also comparable to any other orchestral instrument. To play it well, one must learn it well. It is very easy to play a harmonica badly and it is very difficult to play it well. His advice to budding harmonica lovers is that one must develop one’s knowledge about the harmonica, the music theory and also develop one’s ear. A good player must have a good ear and must be good at reading notes, understand various key (scale) structures. He should be familiar with the basic chord progression and in general prepared to work hard to master the instrument One may also listen to other International Harmonica players such as Jerry Murad, Larry Adler, Tommy Reilly, Toots Thielemans etc (all to be found in YouTube) and study their tone, their harmonica holding, their techniques etc.

He advises harmonica lovers to take harmonica seriously as a musical instrument. One must first try to get clean single blow-draw notes instead of tongue slapping which creates noise. One may play in Octaves but that needs practice and the harmonica should be perfectly tuned. One must learn to play a song in different keys apart from ‘C’ on a ‘C’ harmonica rather than going for chromatic harmonicas of different keys.  One must learn to read notations. One may use the Internet to increase one’s knowledge on Harmonica, how to maintain it, how to repair it etc. but must avoid the trap of randomly playing a song and uploading it online for popularity.

Favourite Harmonicas
Gautam da feels that it doesn't matter which model one is playing. If the harmonica is in tune and is airtight with a smooth slide action, it is good enough. A good player makes any brand sound great. A bad player will find an excuse to blame the brand/model etc. He plays Hohner and Hering. He likes the Hering because he likes its mouth plate (being slightly narrower it fits my mouth better), it is airtight (no air leakage) and it sounds wonderful. Besides his 4-Octave Hering, he prefers the 3-Octave Hohner - not the 4-Octave Hohner due to its slightly fatter mouth plate.  All this is his personal preference. He uses only the C-Harmonica to play songs of different keys.

Gautam da has participated in numerous Harmonica Festivals and knows many International Harmonica Players quite well. He is a member of IHL and SPAH. He is available online at www.salilda.com and various other forums like ‘Harmonica India’ in Yahoo Groups and Facebook. He is always ready to help harmonica lovers by giving them valuable tips on improving their harmonica skills.

HaLoH thanks Gautam da for sparing his valuable time for Ramana and sharing his experience. 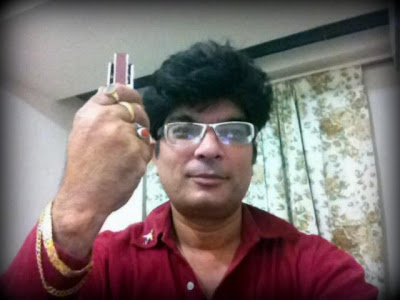 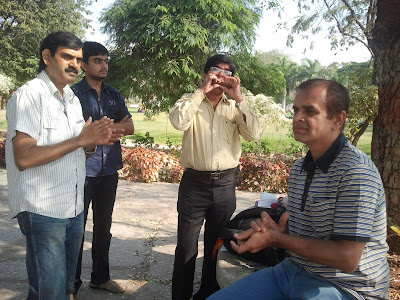 HaLoH introduces to you a die-hard Harmonica lover from Mumbai whose passion towards Harmonica is just 18 months old. It all started when Rajeev Shrivastava, an aircraft engineer (electronics & electrical) was searching for a video song “Bhanwre ki gunjan hai mera dil” on youtube and came across an upload by our very own Ajay Vijh from Singrauli whose article has been published earlier on our blog. After viewing this upload, Rajeev was impressed by Ajay Vijh.

He then purchased a harmonica from a music store to try playing hindi melodies on his own. After repeated unsuccessful attempts for 2 months, he realised that his harmonica lacked that Chromatic button and on Ajay Vijh’s recommendation, he had purchased Hohner 270 harmonica to play hindi melodies. He practiced hard to play the songs. After 5 to 6 months of struggle, he could play a few songs. He also tried playing blues on the diatonic harmonica. He started learning to read western staff notation, solfa notation and later switched over to Bhatkhande (Sargam notation). He’s now mainly interested in Bollywood melodies and first tries to play a song on a keyboard before trying it on the harmonica.

Rajeev Shrivastava  used to communicate regularly with Ajay Vijh and Ramana (HaLoH). His first mass interaction with harmonica lovers throughout India was at Indian Mouth Organ Players’ Meet (IMP Meet), Kolkata. After this meet, his passion for harmonicas became more intense. He practices for hours daily to improve his harmonica skills. There were instances when he would reach his office 1 hr to 1 ½ Hrs late due to his late night practice sessions which lasted till 2 AM or 3 AM.  Apart from his interactions with harmonica lovers who attended IMP meet, he also met harmonica lovers at Baroda, Delhi, Lucknow, Pune and Hyderabad. He also participated in Indian Harmonica Day celebrations at Hyderabad on 22nd November 2012.

HaloH wishes him all the best in his future endeavours.

We breathe harmonica!
Posted by Ramana at Saturday, February 02, 2013 3 comments: