A few weeks ago, on a cold day, I visited Shri Ashok Bhandari ji’s office at Delhi. It was a planned trip from Jaipur. This was our first meeting; nevertheless we felt that we knew each other quite well. I asked Ashok ji to give some tips on playing the Harmonica. He asked me to play and I played the popular Hindi aarti “Om Jai Jagdish Hare” on my harmonica. Bhandari ji took his 16 hole Hering and played this aarti with ease. This was the first time he was playing this tune. He picked it up pretty fast. He mimicked my style at first and later played this very same aarti in his style with “feelings”.

He has developed his “Bellow blowing technique” wherein he ensures that his lungs are filled with a lot of air. He then controls the air pressure while playing the notes. He also demonstrated how to control breathing while blowing and drawing notes. A balance is maintained between how much air is drawn through the holes and through the nose in case of breathing in. Extra air is blown out through a passage created by slightly opening the lips while blowing only the required quantity of air through the holes for the reeds .I also got an opportunity to witness his favourite “stunts” on the harmonica. Well, I’m talking about those strange peculiar sounds he creates on the harmonica. This was followed by demonstration of harmonization, octave playing, different kinds of vibrato etc. There was a drastic improvement in my playing within half an hour of his demonstration.

We were waiting for one more harmonica lover: Harish Nayyar from Amritsar (Punjab) who arrived there directly from New Delhi railway station. When Harish entered the room, he was amazed to see lots of harmonicas scattered on the table. He played the popular Sindhi number “Dama dam mast kalandar” sung by Runa Laila on his Swan 1248 professional. After some harmonica session, we had lunch. We were impressed by his hospitality. Being a learner with no extraordinary harmonica skills, I still felt at ease in his company. It was time to bid adieu after spending 5 hours at Ashok ji’s place. Harish and I really enjoyed ourselves. It was a memorable day. 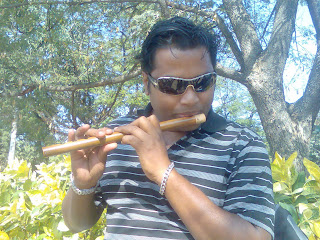 Raman Khandelwal (Popularly known as KK-Kromatic Khandelwal) a virtual member of HaLoH came across one of his childhood friend Vijaykrishna Pilla(who now stays in ) on internet after 20 years. KK was happy to learn that VK Pilla use to playing the flute during his school days also developed same passion for harmonica recently. VK Pilla who was on an official trip to ( ) last week made it a point to meet KK at Pink city without fail. KK and VK Pilla met after 21 years had a good time discussion about harmonica and music. VK Pilla native of learnt about harmonica happenings at HaLoH , immediately he called us from Jaipur and confirmed about his participation in this week’s HaLoH meeting at .

Today, On his arrival he offered us Pheeni(A famous sweet dish of Jaipur) “sweets” are really “sweet”. Later we had a great musical session which included with his flute recital.

Mr VK Pilla left the park loaded with love and affection of Harmonica Lovers of Hyderabad.

We wish to meet him during his next visit to India.

It is 60 years back on the same day a great event has taken place.Jana Gana Mana, composed by Late Nobel laureate Rabindranath Tagore, was officially adopted by the Constituent Assembly as the Indian national anthem on January 24, 1950.

HaLoH celebrating 60 years of our national anthemJanaganamana, since today is HaLoH day(Sunday) our meeting at Indirapark started with our National anthem Janaganamana on harmonica as a group. 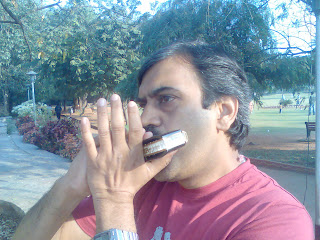 Mr Avinesh Singh, A guitarist turned harmonica player (Lover) actively participated in today’s meeting with his Hohner Super 64x. Mr Avinesh joined HaLoH after seeing this blog. He speaks softly and plays all new songs on harmonica so softly without imitating anybody. Finally we understand that he is a software engineer :-) 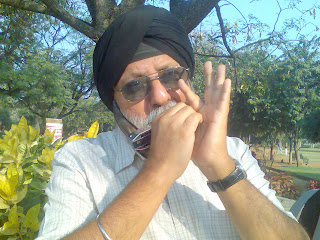 Shri Inderjit Singh Soni, An Industrialist and an Elite personality of , visited HaLoH and played few western numbers on his SUZUKI SCX-64 for us. His keen sense of humor and his incredible sound made it an unforgettable moment. Shri Soni extended his invitation to all harmonica lovers to visit his residence in Gunrock Enclave to make big sounds on harmonica and insisted us to utilize his spacious house premises for the practice sessions either with Hot or cold liquids :-P 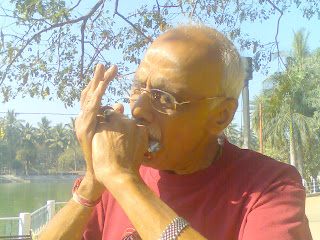 Harmonica Lover Prasad introduced another harmonica lover (his uncle) to HaLoH who is Shri P N Murty, A senior tax consultant of visited HaLoH with his grand collection of Hohner harmonicas.He played few nostalgic hindi tunes for HaLoH. All of us were surprised with his energy levels.

Over a year we had heard a lot about Shri Purnachandra Rao, A senior Harmonica player, Music teacher running a very popular music school SSS Music academy in on top of that he is a music director of Telugu film industry and composed for 15 films.

The atmosphere was really graced with his presence. He played few numbers on harmonica for us, what a performance! Watch this video...

All of us requested him to visit HaLoH regularly to guide us with his knowledge.

January 17 - another encouraging day for HaLoH

On Sunday "Siasat" (one of the oldest Urdu Dailies published from Hyderabad) sent two of their correspondents to interview HaLoH.

They videographed interviews and renderings on the harmonica from all present. They have suggested to us that the raw footage captured would, after editing, be put up on their website; www.siasat.com and also play it over their FM channel "107.8 which is to be launched shortly. The dates for these events will be communicated to us shortly.

They have also offered to provide us a platform in the form of an auditorium, if we can put up a 2 to 3 hour musical show accompanied by an orchestra.

By and large it was a good day but for the fact that Mr Ramana, who is our front man, was traveling and missed the event. It would have been more fun with him around. 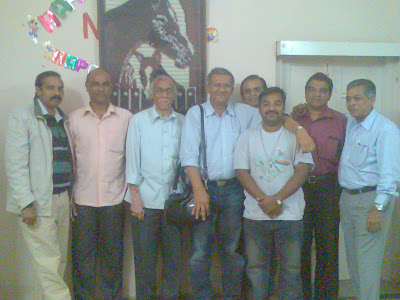 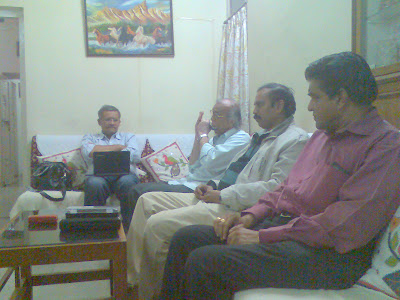 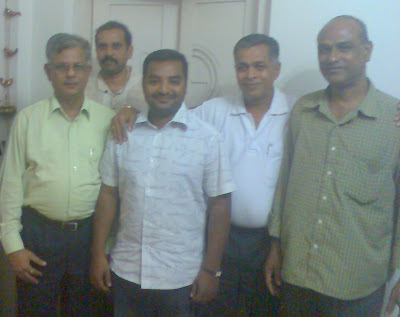 After the visit of Shri Kumarpal Shaw from Harmonica Club of Gujarat ( HCG ) few months ago, Another harmonica lover from HCG Shri Tapan Bhatt visited recently. Shri Tapan Bhatt is General Secretary of HCG. His passion for harmonica would be clearly seen when we exchanged series of messages through SMS. I was delighted to learn that there is one more harmonica lover with the same passion which we have for this instrument. A harmonica musical session was arranged at one of our HaLoH member Shri Mahendra Gala’s residence in the evening on 6th of Jan.Other HaLoH members Vinayak B, A.Rajkumar, G.Rajkumar, Ashwin and Vijay Konda attended that musical session. We enjoyed listening to the renditions by Shri Tapan Bhatt on his Hohner Super 64X. HaLoH members present there had played harmonica one by one followed by the Indian harmonica anthem “Hai apna dil to awara” which was played by all of us together along with the karaoke track.

HaLoH looks forward to meet more harmonica lovers from HCG in the days to come.