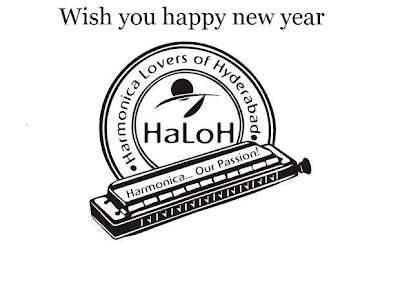 ASHOK BHANDARI- A MAGICIAN WHO LOVES THE HARMONICA

Here’s a mesmerizing rendition by Shri Ashok Bhandari who believes “Anything which can amuse is music”. This piece of music titled “Arabian Nights-Part 2” is being recorded without any digital special effects. HaLoH thanks Shri Ashok Bhandari for this video.

Ashok ji has been playing the harmonica since early seventies. It’s almost forty years now. He was inspired by Late Shri Milon Gupta (Milon da) and Shri Madan Kumar. He had personally met Milon Da twice and took some tips on harmonica playing from him. He remembers listening to Shri Madan Kumar’s renditions on Juke Box during his college days. This used to cost 25 paise per song in those days. Shri Nachiketa Desai, a journalist and a Harmonica lover from Ahmedabad also influenced him in developing passion for this tiny little instrument during their college days at BHU campus. Ashok ji says “I’ve learnt a lot about harmonica from Nachiketa during our stay in the hostel.”

Apart from playing the harmonica, Ashok ji plays the keyboard, flute and many other percussion instruments. In fact, he is a very good percussionist and had performed on various percussion instruments long ago. When asked why he fell in love with the harmonica, he says that it (harmonica) is the sweetest instrument. It is very challenging to play the harmonica because one can’t know what is happening in the player’s mouth. Moreover, harmonica is a magical instrument which leaves the audience spell bound. He sites an example mentioning that he has to take a truck load of props for his magic shows and carries this tiny instrument with him. He always plays the harmonica during his shows and finds that his audience which attends his magic shows is impressed by his harmonica performance to a much greater extent.

Ashok ji is basically a chromatic harmonica player and plays Indian music. In fact this piece of music which is being uploaded along with this article is Arabic music played on a chromatic harmonica. There are lots of chromatic notes in this rendition which he believes is almost impossible to achieve in a diatonic harmonica. He believes that one should “Improvise” on the song one plays and should avoid being a carbon copy of another player. He sites an example of the king of ghazals Jagjit Singh who sings ghazals as per strict music notations in his albums but whenever he performs live in front of the audience, he improvises upon his own music and adds a new flavour to the performance. He also gives an opportunity to all other people accompanying him with various musical instruments to improvise. Ashok ji says, “When western people improvise on our music, we say it is fusion but when an Indian improvises on any music, it is frowned upon.” He prefers playing Indian music on a chromatic harmonica rather than playing the same on a diatonic harmonica by bending notes. He loves to hear harmonica players playing Indian Raagas and Folk. He says that he isn’t a good harmonica player, however he is a good performer and knows how to mesmerize his audience with his harmonica. A majority of his harmonica audiences on internet are foreigners who enjoy his Indian music. According to him, there is a lot of scope for harmonica to develop as a professional music instrument in .

Message to all harmonica lovers:

Magician Ashok Bhandari is thankful to various online harmonica groups and forums, different blogs and websites pertaining to harmonica for promoting this instrument. He says “We should avoid having ego and petty quarrels between various harmonica players. Criticism on one’s rendition should be taken positively to improve our knowledge about music and harmonica playing skills. Friends, lets keep the harmonica flag high”