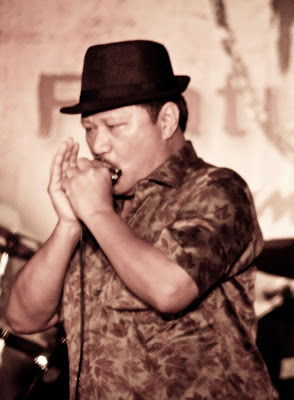 Given below is his write-up in his own words:

My journey with harmonica began when I first bought a Chinese ‘Tower’ harmonica for Rs.125/- way back in 1997 in Guwahati. Those days, harmonicas were not readily available. It was a chromatic harmonica and soon I started playing  a few numbers. I remember one of my favourites those days was ‘Boxer’ by Simon & Garfunkel. I also used to play a few Hindi Bollywood numbers and a few more Assamese numbers composed by Late Bhupen Hazarika. Someone from Mirza in Assam one Mr.Das  brought a neck rack for me from USA and I soon started playing harmonica on the rack. Those days diatonic harmonicas were not readily available. Then in 2002 I acquired my first diatonic harmonicas. These were Lee Oskar harmonicas in different keys. These days I play mostly Hohner and Suzuki harmonicas. One of my friends had brought them from USA. My early influence was definitely Neil Young. Even though I liked some of Bob Dylan Stuff, I preferred the likes of Neil Young more. I made my first western album titled ‘Our Land’ in 2004 and my second album titled Hunpori in Assamese in 2008. I have played harmonbicas in both the albums.  In my early days, I did not know what blues were or playing in second position meant. It was gradually that I learnt more about playing in 1st, 2nd, 3rd and 4th position on a diatonic harmonica. Started using internet only from 2007 and gradually the world of ‘Blues’ opened up and then  I came to know about legendary Little Walter, Sonny Boy Williamson II, Walter Horton, Sony Terry etc . Of the current lot, I am very impressed with Jason Ricci, Howard   Levy, Todd Parrot, Frenchman Sebastien Charlier. Among the ladies, it’s Rachel Plas, Christelle Berthon.

Asia Pacific Harmonica Festival I attended in Singapore in 2010 and Kualalumpur in 2012 was an eye-opener for me. Number of participants mostly the kids aged between 6-16 years and their expertise with the instrument amazed me. I found that the standard of harmonica playing especially chromatic is very high in South East Asia and neighbouring countries. Unlike in India, there are many harmonica teachers in South East Asia and harmonica education starts from very young age. Kids are ably guided by quality teachers with the knowledge of notations. The difference I find is that in India we play out of love for the instrument and are happy once some proficiency is achieved. If one attends a harmonica meet in India, one will usually find middle aged people taking part and very few kids aged below 10 or 15. There is not much competition. Unless kids are taught to play harmonica from a tender age, high degree of proficiency in playing harmonica cannot be achieved. Need of the hour is opening up more harmonica schools and holding competition among the kids.
I always felt the need of discussing nuances of playing diatonic players where I live; but there being hardly any diatonic harmonica player, I felt frustrated at times. Therefore when famous harmonica player Brendan Power visited India in 2011, I invited him to perform in Guwahati. He came to the city with Abe Thomas who is the moderator of Harmonica India. Brendan and company stayed in my residence.  Brendan was a revelation. I remember after picking him up at the airport, I was driving the car. Then he started playing the harp in the car itself and throughout the journey to my residence where he put up, I was foot stomping and tapping the dashboard vigorously. Brendan’s concert in Gymkhana club, Guwahati  was a sell-out. Well known Blues band ‘Soulmate’ also performed that day. 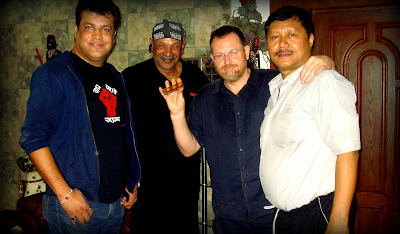 We know that there are missing notes in diatonic harmonica and unless one learns the advance technique known as overblow and overdraw, one cannot get the missing notes. Since 2009, I have been learning the advance technique and at present I can reasonably play the missing notes by employing the advance technique. Had there been no internet, it would have been very difficult for me to learn.  I have spent hours and hours learning to overblow and it was very frustrating at times not being able to play the notes. I have damaged/broken several reeds in the process, but it was worth it. But gradually, I leant how to overblow.
I had the opportunity of meeting several harmonica players in Delhi All India Harmonica Meet in 2013 such as Saitejas, Madan Kumar, Ashok Bhandari, Ramana, Anupam Paul, Debashis Dutta etc. There are more harmonica players, I could not interact with.  Saitaejas  came to my residence in Guwahati on his way back from Hornbill Festival, Nagaland. It was a pleasure meeting him and his initiative in teaching young children to play harmonica is the need of the hour. Among the diatonic players I have met Aki Kumar who is based in America, Vikash Karandikar, Ramasesh, Subham Harnal, Sridhar, Dileep Naik, Bob Lyndoh etc. Number of diatonic players in India is very small. While attending APHF also, I observed that there are not many diatonic harmonica players in Asia. Indonesia is however coming up with good diatonic harmonica players.  If we want to compete in APHF, we have to have high degree of proficiency in playing the harmonica and that is why exposure is required. I wish more Indians would attend APHF to experience and see the high standard of harmonica playing. Even though I have five-six Hohner and Suzuki chromatic harmonicas, I have stopped playing them. I am concentrating totally on playing diatonic harmonicas now-a-days. 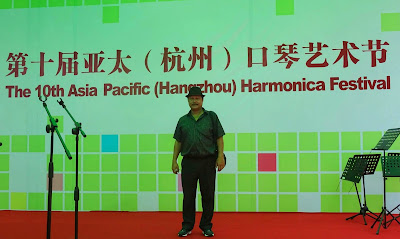 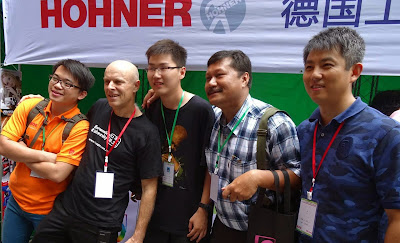 We breathe harmonica!
Posted by Ramana at Saturday, September 27, 2014

Only those who has golden heart can hum melody. It's a great feeling to have such wonderful and excellent person in our fraternity.

Only those people with golden heart can hum melody. It's a great feeling to have such wonderful and excellent person in our fraternity.