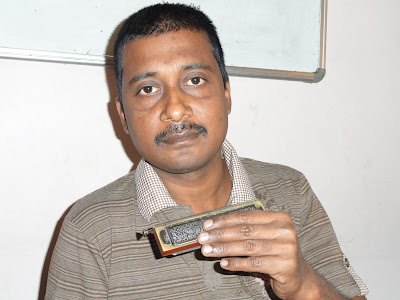 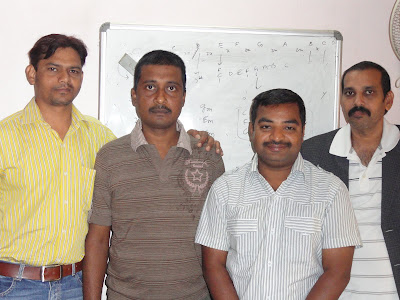 We would like to express our deepest thanks to Mr Sukanta Ghoshal for his love and affection towards our team members Vijay Konda, Ramana and Rameshwaram Bhardwaj during their recent visit to Howrah. We take this opportunity to tell you a little bit about Mr Sukanta Ghoshal and his Chromatic Journey.

Sukanta Ghoshal’s musical career is a story of an enduring love towards the chromatic harmonica. Born in Shibpur, Howrah in 1970, Ghoshal was brought up in a rich musical environment. His dad being a disciple in tabla of the great Pt. Jnan Prakash Ghosh – informal musical sessions at home were common. What’s more - his aunt used to be a professor at the Rabindra Bharati University, and an aura of Rabindra Sangeet was surrounding him. These combined musical factors thus had a profound effect on Ghoshal from his childhood days as he developed a strong liking for music.

While in college, Ghoshal was inspired by a senior and took to the chromatic harmonica when he was a first year undergraduate student. He started out as a self-taught guy on a ‘Tower’ and even did a couple of shows that way! But soon he decided to learn the instrument formally, and started doing so from Premangshu Chatterjee, back in 1991.

As recollects Ghoshal, the first 6-7 months went on smoothly, and he never failed to live up to his home assignments. Harmonica by then must have captured Ghoshal’s mind completely! “It was for the first time in the song ‘Pathe Ebaar Naamo Saathi’ – that I stumbled upon some difficult note progressions.” – admits Ghoshal, smilingly!

The learning went on fine and Ghoshal got himself his first ‘Hohner Super Chromonica’ in 1992. In 1994 came an important juncture when he became a disciple of the great Milon Gupta! Unfortunately, Milon Gupta died in February 95 – Ghoshal continued learning though from his daughter Mummun Gupta. By this time, he had become quite adept at reading music on the go.

In 1995, he started learning harmonica from the great Parimal Dasgupta, considered a legendary musician, composer and arranger in the Calcutta music circuit. Dasgupta being a learned man and a scholar of music in his own right, Ghoshal started learning the technicalities and nuances of music from him and began to acquire maturity in terms of technique and theory. It was Dasgupta who also taught Ghoshal concepts of harmony and double stops in the 3rd and the 6th!

1995 proved to be a turning point in Ghoshal’s harmonica career in more respects! It was this year that he surpassed 65 competitors to snatch the winner’s trophy in both ‘Light Indian’ and ‘Rabindra Sangeet’ categories – in a competition organized by the IHA (Indian Harmonica Association) in memory of the Late Milon Gupta. What’s more – he was also selected as a grade artiste at the All India Radio! And Ghoshal did not have to look back ever since.

A regular performer with the AIR, Ghoshal does public shows selectively. Speaking of his memorable moments as a performer, Ghoshal fondly remembers a show in 2006 at the CCFC grounds in Kolkata where he played an unbelievable 25 songs at a stretch in a show spanning over 2 hours!

Ghoshal’s art reflects his sheer control over the technical aspects of playing a chromatic. His playing is also characterized by his mastery over speed; executing difficult and fast note progressions on a chromatic harmonica in a crisp manner that only a few can pull of! Ghoshal is also very particular about the small vocal inflections and nuances and is always on the lookout for that elusive ‘feel’ while he is at a song!

As a musician, Ghoshal has always been inspired greatly by the compositions of Gurudev Rabindranath Tagore and Salil Chowdhury – and of course by the playing of the greats such as Larry Adler and Milon Gupta. “I have listened to ‘Salil Chowdhry Hits’ by Milon Gupta more than 200 times!” – chuckles Ghoshal.

Since 2000, he is also engaged in inspiring others to pick up harmonica - as a faculty at Banichakra, Kolkata – nurturing fresh minds to take the art forward!

Gem of a player ! Very expressive and indeed a perfectionist. His Sidewalk and Hungarian Dance No 5 are excellent, too !

My humble request to Sh. Sukantoda to upload more such videos of him for the benefit of everyone of us.

Shri Sukanta Ghoshal is a free style player has played " O' sajana " with entire interludes effortlessly without any auxiliary attachment and that too devoid of any error.This is one of the most difficult song to play.Many things I have learnt from his play.Such are the players which can help India get a recognition at international levels.

@Keyurji: Sidewalks by Sukanta-da is also a personal favourite of mine!

Hi !! thanks to Haloh blog for a lovely rendition by a lovely player.

This is excellent!! Thanks for posting Sukanta ji's video. I loved the intricate parts which he has done so effortlessly.