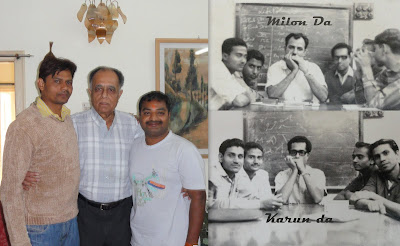 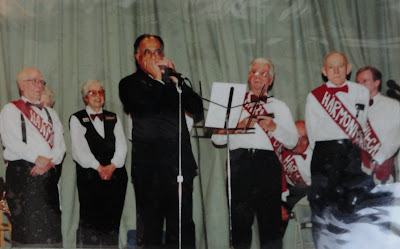 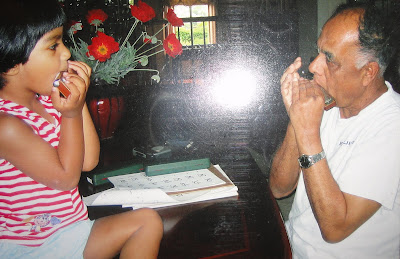 Our team member Ramana along with harmonica lover Rameshwaram Bharadwaj visited Chandan Nagar, Kolkata to meet Milon da’s close associate and one of the greatest harmonica players of India. Karun Chakraborty, a resident of Chandan Nagar (West Bengal), a painter by profession, has been following his hobby of playing the harmonica for more than 50 years now. He is a member of SPAH(Society for Preservation and Advancement of Harmonica), headquartered in Michigan (USA) and was invited to perform everyday in the week long 37th Annual convention held in Romulus, Michigan in August 2000. The renowned harmonicist of Kolkata , Late Milon Gupta was his teacher and guide.In Milon da’s absence,He used to train his(Milon Da’s) students.

Mr Chakraborty was awarded the Gold Medal in the West Bengal Youth Festival in 1965 and has been performing at many venues in India as well as overseas all through. In the US, he has performed at University of Utah, Salt Lake City in 1997 for the "Fifty years of Indian Independence Celebrations", at Hartford, Connecticut and at Yale University, New Haven, Connecticut in 1988. In the same year, he was invited to become an honorary member of the Golden Age Harmonicats of Chicopee, Massachusetts which had been founded by the late Sam Sheppard, and played at several functions all over the New England area as part of the group. He is equally skilled in playing Indian tunes as well as Western tunes. Very painful to share with you- now he is visually handicapped due to macular degeneration since his early 30s. However, this hasn't discouraged him to play the harmonica which he feels is his life.
Mr Karun’s better half- Smt Dipali Chakraborty, HOD Dept of English,Shillong College(Retired), also a music lover always accompanies Mr Karun Chakraborty at all the events. She has special interest in Rabindra Sangeet and has translated around 50 songs to English and those were published in Kolkata local magazine- "KRISTI".

The couple extended a warm welcome to our team members and this meeting was one of their most memorable meetings.