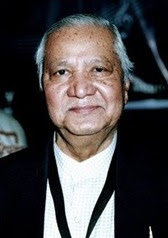 -Harmonica Lovers of
Posted by Ramana at Wednesday, July 14, 2010

Yes Avinesh bhai,
When I met Arijith da in his residence at Gurgaon, Arijit da advised me "playing harmonica by ear is not a crime,But try to follow the renditions of the artistes like Manohari Singh to get the correct notes" later I realized the potential of Manohari Da.

My deepest condolence to his family.

I am deeply saddened by the loss of such a great musician and sax player who dedicated himself to music and serviced the entire music community. I wish to express my deep condolences to everyone whom he was known. My sincere sympathy to the bereaved family.

Keyur Ji and Ramana,
I was amazed by his saxophone play. What a great loss we have. I share sentinemts with Keyur Ji, Ramana and all others on his loss.
But we must try to learn from the musical assests which he has left behind for us.
Warm Regards, Avinesh Singh (HaLoL)