A lady, a doctor and a Harmonica Lover- Dr Babita Basu 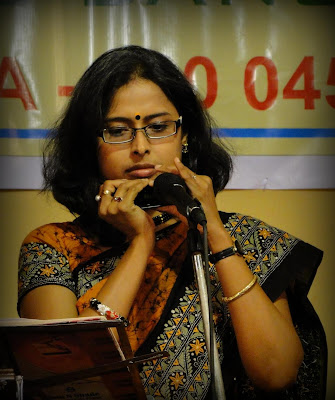 HaLoH is proud to publish an article on a Lady Harmonica Lover this week. This is an interesting write-up by Dr Babita Basu in her own words.
I was born in a middle class family where music was a part of life. My uncle was a composer and a guitarist ; my cousins were either a vocalist or an instrumentalist. Me being a girl, was supposed to learn vocal music though I was passionate about instrumental music as my elder brothers used to pursue. When I was of  5 to 6 years of age I  was admitted to Geetobitan Institution  to learn Rabindrasangeet ànd Hindustani Classical . I continued there for 8 to 9 long years as a vocalist . But as my soul always wanted to be an instrumentalist I quit my music school giving the reason that my academic career is suffering because of music. That was the time when I came across a very cheap quality harmonica and started playing songs on it ; always missing the chromatic notes ! Then I asked my father to buy me a chromatic harmonica which he promised to buy if I could clear my Combined Joint Entrance Examination. So I cleared it and achieved ranks in both Engineering and Medical stream. I opted for Medical and also got a Hero chromatic harmonica from my father as a reward!
I was admitted to N.R.S Medical College And Hospital and from there my career as a harmonica player started to bloom . Innumerable programmes that I participated over there enriched me as a performer. That was the time when Sir Milon Gupta became my virtual guru. I used to buy his cassettes and learn the technique of playing though I never got any chance to meet him in person!
As soon I completed giving my final MBBS examination I got married . My mother-in-law happened to be herself a vocalist and insisted on further training of mine both in academics and music.I did my post graduation in Anaesthesiology after marriage and at the same time started learning keyboard under Mr Rana Dutta. It is he who made me feel the divine power of music. I learnt everything from him ; starting from notation reading ,performance , composition , difference in playing lead and part , jamming ---- everything . In the meantime I went to Mr Bhaskar Choudhury to learn the intricacies of techniques while playing harmonica . I was there for five years. I won the best performer award from Indian Harmonica Association whereby I got my first superchromonica harmonica from my mother -in - law as a gift !
In the meantime Raga Music came up to produce my album LOVE IN HARMONICA in the year 2008 and perhaps it is the first documentation of harmonica playing by a lady player in an album form in SOUTH EAST ASIA . It was followed by three more ; HARMONICA OFFERING , CONFLUENCE and FREEDOM THROUGH HARMONICA . Among these CONFLUENCE is a DVD where I played simultaneously keyboard and harmonica ,doing the chordings with one hand and playing the part music and harmonica with the other . After these ; offers came flooding in both as a composer and as a harmonica player . I have played part music in albums released by a lot of vocalists , have also played in a Bengali movie LATTOO , have composed and played several commercial jingles . Critical appreciation of my work have been published in reputed newspapers of Bengal like ANANDABAZAR PATRIKA , BARTAMAN , AJKAAL , HINDUSTAN TIMES . I was fortunate enough to be considered to give an interview in ASHABARI - a reputed musical journal of Bengal . I got the opportunity to voice for harmonica in several interviews arranged by All India Radio , Kolkata Doordarshan , Tara music and ETV Bangla .The greatest moment of my life as a performer was , when I was felicitated by KOLKATA VIVEK on the same stage along with PANDIT AJOY CHAKRAVARTY . Nowadays ; I even became very much selective in choosing my live performances on stage . Ours is a joint orchestration and I have stopped performing with accompanists whom I do not know , because I believe all our presentations need a lot of thought and practice and would be impossible to deliver properly without a good homework involving all the members of the team . My team members are also very reputed musicians of Kolkata.
Now , as regard my future plans I believe in breaking in one hand and creating on the other. My next album will not have any similarity with the one already released my next television show will have no resemblance with the previous one . Yes , that is me .Fortunately  Raga company is very much impressed by my work and they assign me with all the basic works on Harmonica , saying that there are lot more to play film songs ! Through Indian Mouthorgan Players Group on facebook I came to know that there are so many good players in all over India . I would like to request them to play popular regional tunes of their particular state on harmonica and post them so that we can enrich ourselves with different melodies of India . Good melody actually doesn't require any language!
Before I end this write up , I would like to convey my gratitude to all my harping friends,from the core of my heart to include me to the community . I promise to give my best to harmonica and when the time would come that ,

MY SOUL CAN BREATHE NO FURTHER


I SHALL PASS MY HARP TO SOMEONE STRONGER !

Embedded below are the videos of LIVE programme by Dr Babita Basu at “GANBHASHI” Programme  by TARA MUZIK,  A popular Bengali TV Channel on 14th August 2013.