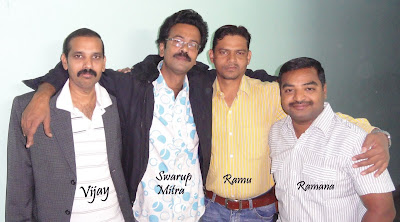 Harmonica lovers Ramana,Vijay Konda from Hyderabad and Rameshwaram from Katni (M.P.), on their trip to Kolkata, had the previlege to meet a harmonica lover at his residence in Raniganj (West Bengal). This 40 year old teacher in a govt. primary school is lovingly addressed as 'Harmonica tiger' by Ramana and Rameshwaram. He is Swarup Mitra, a student of Milon da’s student-Saikat Mukherjee. Swarup Mitra is an excellent harmonica player. His soul is completely filled with music. He can play keyboard like a professional and can produce all the chromatic notes like a vocalist through his throat. He doesn’t need any chromatic tuner to identify any note. He has got musical ears and trains his students to play with the help of notations. He has enormous talent with multiple qualities. Above all, he is down-to-earth and friendly.

Early days as a harmonica lover: 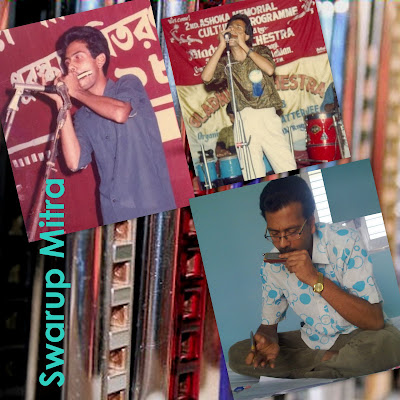 Swarup Mitra was in 3rd or 4th standard when he fell in love with harmonica's sweet sound. He used to listen to his father's friend's son. When he asked for the harmonica, the boy scolded him but later lent him his diatonic harmonica to play. By evening, he managed to play 2-3 lines of Rabindra sangeet on his own. Very soon, he could play almost 75% of the tune in his house. His father bought him some locally made harmonicas but he opened all the harmonicas and broke them. When he was in 7th standard, his name was registered to play harmonica on Rabindra Jayanti at school. He did not have any harmonica with him for the purpose. So, he borrowed a 24 holes hero tremolo harmonica for two days from his father's student and played that song. For this, he was gifted a fountain pen by his school.

Swarup Mitra always felt that he was not getting all the missing notes on the harmonicas. In 1985, he purchased his first Hero Chromatic harmonica. From then onwards, he used to play regularly in different cultural programmes on invitation.

One interesting event he cannot forget is during his trip to Goa and Mumbai. He came across some foreigners who started dancing on listening to his harmonica. They had a good music session after which they gifted him some swiss chocolates.

In search of a harmonica Guru: 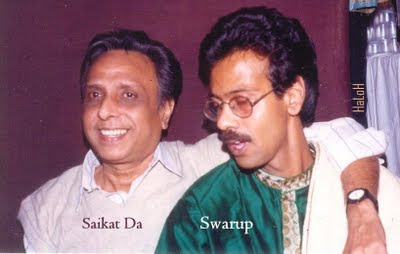 Swarup used to listen to Milon da's renditions on Vivid Bharti. He also purchased cassettes of Milon Gupta and Saikat Mukherjee. In 1987, he came across a person who used to learn from Saikat Mukherjee. When asked about the address of Saikat da, that person did not give him the address but just dropped a hint that Saikat da lived in Kamarhati area. That hint was enough for him to plan a meeting with Saikat da. It was a herculean task to find a person in the streets of Kamarhati. However, Swarup was determined to wander in that area with a Hero Chromatic harmonica and three audio cassettes of Saikat da. He thought of showing those cassettes to people in the streets and find Saikat da's address. He was lucky enough to meet a person on the road who knew the address of Saikat da.

Finally, Swarup Mitra reached Saikat da's residence. He waited for some time till Saikat da arrived. Saikat da listened to around 4-5 songs and told that he would send him (Swarup) to his guru Milon da as his guru would be able to teach better. However, Swarup insisted that he would learn from Saikat da. Saikat da agreed. Very soon, in a span of 7-8 months he became very close to the family members of Saikat da. Saikat da's wife insisted that he should stop taking fee from his student Swarup because he became just like a family member. From then onwards, Saikat da never accepted any fee from him. He also visited Swarup's house with his family and stayed there for three days.

In 1988, Swarup Mitra convinced his father Shri. Kamal Kumar Mitra to buy him a Hohner Super Chromonica 270C from M.Hohner, Germany. They wrote to Hohner directly regarding their interest in purchasing a harmonica. The company agreed to ship the harmonica after receiving International Reply Coupons equivalent to the costs involved. Finally the parcel arrived. Swarup could not sleep for 4 days due to excitement.

Visiting the Mecca and Madina of Indian Harmonica: 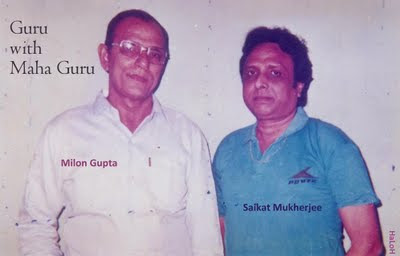 In1990, Saikat da told Swarup Mitra that he would take him to the Mecca and Madina (holy places) of Indian harmonica. That place was none other than his Guru Milon Gupta's residence. Swarup was stunned to hear Milon da live. He was highly impressed by Milon da's style and techniques. He had the previlege to see Milon da demonstrate various techniques in front of his eyes. After a few years, when Milon da breathed his last, he cried a lot.

Very few people in India dream of pursuing a career in harmonica. Swarup Mitra once dreamt of pursuing his career in Harmonica. For this, he got support from his parents and he even quit his job at Indian Railways, Chittaranjan because he felt that the prevailing condition at Chittaranjan was not conducive for practicing harmonica. He did not get that environment which would motivate him to take his harmonica seriously.

He went to Doordarshan around 30 times just to get an audition form but failed to get one. On a sunday, he saw an amateur boy playing the harmonica on Doordarshan. Eventually, he was disappointed and decided not to approach Doordarshan any more and continue concentrating on practicing harmonica and teaching how to play this wonderful instrument to those who wish to learn from him.

Swarup Mitra likes listening to the renditions of Milon da, Saikat da, Karun da and some songs of Gautam da. He has special regards for his student Mukesh (a flute artist and a good harmonica player) and Ritesh Mallik without whose support he wouldn't have come across many harmonica lovers including some HaLoH members through You Tube.

Message for the beginners:

1) LISTEN to the song AGAIN and AGAIN (as many times as possible) before playing it on the harmonica.

2) LEARN NOTATIONS because notation is the skeleton of the song.

3) ADD EXPRESSIONS to the song because the skeleton should be covered by a body.

4) Don't be proud that you are better than the other