The details of this programme are given below. 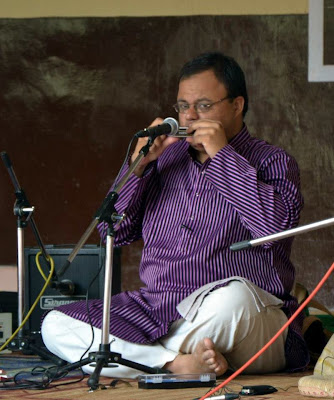 Saitejas’ journey began with Carnatic vocal music. After initial classes under Ratnamma Murthy, he trained under Sarvamangala Dhruvanarayan, M.S. Vidya, R.K. Suryanarayana and Rupa Sridhar, his current teacher. He also learnt tabla from K.L. Jamadhar and Vishwanath Nakod (his light-music teacher too). Along the way, he won prizes, a scholarship, and performed on stage, radio and TV. These 16 years of training contributed to his harmonica concert. After all, this was a performance without precedent, without teacher or guide. Saitejas just applied his extensive classical-music training to the harmonica.

His tryst with this instrument began at the age of 10 when, like so many children, he received a diatonic harmonica as a present. “I would play film songs and the national anthem. At one point, I attempted the Bilahari Swarajathi ‘Raravenu’ as Bilahari is a Shankarabharanam derivative and Shankarabharanam is a major scale in western music, where the harmonica is prevalent.”

It turned out right and so he began playing other Shankarabharanam derivatives like Kadanakuthuhalam, Hamsadhwani, besides Mohana. The turning point came when he ventured to play “Vatapi” (Hamsadhwani) on harmonica at an intercollegiate competition and won the first prize. Since there were violin and veena players participating, this win was an endorsement of his experiment.
He soon stepped out of the boundaries of Shankarabharanam and started on Anandabhairavi, Malayamarutham, Rithigowla, etc. “I also acquired a chromatic harmonica with a slide bar which enables shifting of swaras and thus, production of more ragas. It has 12 holes, 48 reeds and three octaves.”
So, in 2006, Saitejas gave a 45-minute Carnatic concert and in 2009, he gave a full-fledged concert (90 minutes) including alapana, neraval, and kalpanaswaras.

The journey, however, was not easy. First, there were no teachers, or guides. Second, the process of alternately blowing and drawing out air, which harmonica-playing entails, can be fatiguing in a long performance. Moreover, producing gamakas is a big challenge. And there have been critics.
Some senior musicians opined that this was an unwarranted experiment, saying the harmonica is inadequate for Carnatic music since it can never produce the full range of a human voice or violin.

“My knowledge of anuswaras from vocal training has helped enormously. I am now attempting tougher ragas like Huseni and gamaka-laden Carnatic Shankarabharanam. I agree the harmonica is no match to the violin or human voice. I’m not sure I can play Thodi or Bhairavi on it. But then while every instrument has its limitations, it also has its own potential and that is what I am working on. With inspiring models like pathbreakers Kadiri Gopalanath and C. Ramdas, I hope to make the harmonica more productive and acceptable.”