Last night Harmonica Lovers of Hyderabad celebrated 81st birth anniversary of Milon da. They had a great time from 10 pm till midnight playing few Milon da’s numbers on harmonica. Milon da is the man who popularized harmonica with his melodies and taught harmonica to many harmonica lovers including our core member Shri Vinayak B.

Waah Ustaad! : Harish Nayyar from the land of Golden Temple 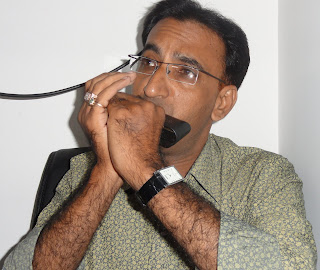 If you are a harmonica lover and a regular follower of You Tube channels pertaining to Indian music played on the harmonica, you must have definitely come across this slim young Punjabi businessman from -The of . He is our harmonica lover this week. His harmonica friends lovingly address him as ‘Ustaad Harish Nayyar’.

First harmonica-First song: It all started in 1990 when Harish, a college student was holidaying with his friends in Dalhousie. He purchased a Hero tremolo harmonica. After initial struggle, he could play the Indian harmonica Anthem- ‘Hai Apna Dil To Awaara’ from the movie Solva Saal. Within a few months, he purchased a Tower Chromatic harmonica and started playing Hindi songs on it. He also performed on stage during college functions. This was just a beginning and Harish never used the chromatic button because he was oblivious to the fact that the button is meant for getting chromatic notes in between some songs. Soon, he passed out of college in 1992 and played the harmonica once in a blue moon.

Passion for harmonica: Love for the Harmonica re-surfaced again in 2008 and Harish started playing harmonica regularly. He started uploading his renditions on the You Tube. It was during those days that he became popular through his channel. Our member Raman Khandelwal remembers talking to Harish Nayyar over phone in 2008 to convince him to upgrade to valved harmonicas of other brands. He also remembers how people used to identify this budding harmonica player. One day Shri Vinayak B., a senior harmonica player of told Raman about Harish that there is a guy who attempts new songs on his Tower harmonica and he has a good sense of melody. Very soon, Harish learnt the usage of slider button and started playing complicated songs. People used to discuss about this guy usually playing those songs impeccably on a ‘Tower’ which were never attempted on the harmonica. He proved that even on an ordinary budget harmonica, one can get wonderful melody. He has no basic knowledge of music and plays the harmonica by ear on a ‘C’ Chromatic harmonica by matching with the scale of karaoke tracks.

Soon, Harish upgraded to a ‘Swan’ valved chromatic harmonica. He improved his harmonica skills manifold times after switching over to a 12 hole valved chromatic. Later, he purchased a Hohner Larry Adler Pro 12. Currently, he plays on the Hohner CX-12 harmonica which is his most favourite instrument.

There’s one funny incident which Harish recalls. One day he came across an advertisement of a music institute in which also mentioned ‘harmonica’ in the list of music instruments that were being taught. Harish went to the institute to improve his harmonica skills and found two young guys managing the institute and teaching the harmonica. They played some songs on the harmonica and demonstrated how they would go about it. Then they asked Harish to play some songs. Once, Harish started and played a couple of songs, they were dumbfounded and immediately requested him to join their institute as a harmonica tutor. Harish was reluctant to do so because he felt that he had miles to go and learn a lot before he starts teaching. He politely declined their offer and went back home.

Style and preferences: Harish usually plays Indian melodies. He enjoys playing those songs which were never attempted on a harmonica by other players. His style of playing can be easily identified by his ‘murkis’. Harish says that he can’t play any song straight. He naturally tends to use ‘murki’ while playing. He says “I listen to the song carefully before attempting it and believe that if one listens to the song right, one plays right and if one listens to the song wrong, one plays wrong. I try my best to play in ‘sur’ i.e. play correct notes as far as possible and if unnecessary, I avoid effects like hand vibrato and tongue slapping which may deviate from actual music.

HaLoH wishes Harish Nayyar a Happy Birthday! He’s celebrating his birthday on the 17th of November. Enjoy this rendition- ‘Satyam Shivam Sundaram’, yet another non-conventional song played on the harmonica by him.

More info on Harish Nayyar is available on the following links of our blog.

One must definitely listen to this Sindhi number ‘Dama Dum Mast Kalander’ played by him.

An evening with "Debashis Dutta" 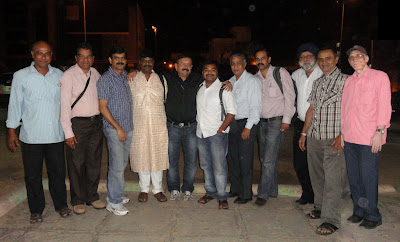 Recently, after celebrating Deepawali, Harmonica Lovers of Hyderabad met another harmonica lover Mr Debashis Dutta from . They had dinner at a restaurant after having a good musical session. HaLoH members enjoyed listening to the renditions by Mr Debashis and also played the harmonica one-by-one.

Mr Debashis Dutta, an Aerospace and Materials engineer by profession, is 55 years old. He is based atBangalore where he had lived and worked for the last 30 years. He did his B.Tech in Metallurgical Engineering from BHU-IT and then followed it up with an M.Tech degree each in Aerospace Engg (IIT-Madras) and Materials Engg (IISc Bangalore). He currently works in a senior engineering position for a USbased aerospace MNC in . He is a member of harmonica Club of Bangalore.
He is a self-trained mouthorgan player. He got introduced to this instrument when he was about 14/15 years old in high school by his maternal cousin Mr. Satinath Mukherjee who was an accomplished harmonica and piano professional and a contemporary of the great Milon Gupta. His cousin gifted an old Hohner mouth organ to him which he still possesses. What interests him about the instrument is that it is quite versatile, user friendly, a constant companion for every season and every place and produces music that pleases his ears along with everyone else’s ears. Moreover, anyone with an ear for music can learn the instrument on his/her own and give performances.